Tackling racial bias and the lack of diversity within the judiciary

A study of racial bias, inclusion and antiracism training focusing on judicial office holders in England and Wales.

Racial bias and the bench report

Our report, Racial Bias and The Bench: A response to the Judicial Diversity and Inclusion Strategy (2020-2025) raises urgent questions about racial attitudes and practices in the justice system in England and Wales. Although the judiciary wields enormous power over individuals, its operations are alarmingly underscrutinised, and one area that has remained largely beyond examination is judicial racial bias. The report draws on a survey of 373 legal professionals.

95% of respondents said that racial bias plays some role in the processes or outcomes of the justice system, and 29% said it played a ‘fundamental role’. A majority of respondents had witnessed one or more judges acting in a racially biased way towards a defendant and in their decision-making.

Racial discrimination by judges is most frequently directed towards Asian and Black people according to the survey, with people from Black communities - lawyers, witnesses, defendants, etc. - by far the most common targets of judicial discrimination. Young Black male defendants were the subgroup most frequently mentioned as targets of judicial bias.

The survey did find that some judges are already acting in ‘antiracist’ ways by being conscious of and knowledgeable about racism, and seeking to mitigate it - however, only a minority of respondents had ever seen a judge act in this way.

Race training is neither compulsory nor provided on a regular basis – only 49% of the respondents who have worked as judicial office holders had received race training in the preceding three years.

Overall, the report suggests that the combination of quantitative and qualitative data presented, substantiated by the kind of reports listed above, amounts to evidence of ‘institutional racism’ in the justice system presided over by judges.

Watch the recording of the report launch

With raised public concern about the treatment of ethnic minority communities in the justice system of England and Wales, serious questions are being asked of judges and the judiciary. Despite the disproportionate number of ethnic minority people criminalised by the justice system, new recruits to the predominantly white and privileged sector of the judiciary currently receive little or no formal guidance on racial literacy and antiracism.

Our project was created in response to the Judicial Diversity Strategy and is led by researchers from the University of Manchester and a part-time crown court judge who is a training tutor for the Judicial College. It considers how judicial officer holders are trained and how racial bias is tackled in comparative contexts and, drawing on data driven research, aims to make recommendations based on a deep understanding of racism as structural, institutional and interpersonal. This project will go on to encourage research projects rooted in the need for fair and equitable treatment in the justice system.

Black barristers are under-represented in the judiciary, and also report experiencing racism from judges, magistrates and panel members. On top of this, The Lammy Review and the Race at the Bar report both found sentencing outcomes are harsher for many ethnic minority defendants than their white counterparts.

The lack of diversity in the judiciary is a problem that starts in schools and colleges because of deep racial and class inequalities that affect educational access and progression. As part of our project, we have spoken to first-year Law students at the University of Manchester who are enrolled on the new 10/10 programme that offers academic and career support for Black undergraduates in the Humanities. 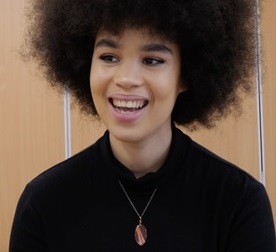 I’d like to be a barrister and work and advocate for people, but I think my big dream is to possibly become a QC or a judge and fix the system from the inside out in any way possible… you can be a voice of reason and an understanding person for other Black people and people of colour.

Sarah Duff / First-year Law Student at the University of Manchester